From the Caucasus’s rugged peaks and Riga’s cobblestone alleys to Iceland’s wild and beautiful lava landscape. Lavender-scented archipelago in Croatia and the Mediterranean that clings to Greek island pearls, mythical places where the sirens live. And so Tuscany that attracts with wine fields and wonderful food culture. Almost like home – but always strangely new: Europe.

Contrary to the gut feeling of most Europeans, experts disagree about whether Europe can be called a continent at all. Strictly speaking, Europe is only a peninsula to Asia, and the perception of Europe as an independent continent depends more on culture and tradition than on strict geological principles. For the same reason, there is also no fixed, logical boundary between Europe and Asia, but most of them pull it through the Ural Mountains and down through the Bosphorus, which means that only a small part of Turkey belongs to Europe. A similar confusion applies to Greenland which is politically European but geographically belongs to North America.

The three biggest cities in Europe are Moscow, Paris and London.

Geographically, Europe, or the Asian Peninsula, can be likened to a kind of skateboarding ramp with mountains in the northern and southern regions and a large, fertile plain in the middle. The current view of Europe as a fairly smooth and continental continent is not entirely justified. For example, the mild climate that Northern Europe has been blessed with in relation to latitudes is a rather extreme phenomenon. In Iceland and Italy there are volcanoes and in the Swiss Alps, in Iceland and Greenland you will find extensive glaciers. In addition, here are the Norwegian fjords that cut into the steep mountain sides, and which belong to some of the world’s longest and deepest. 90 percent of Europe has been covered by forests, but the vast majority of the natural forest stock has long since been given the place for cultivation and pasture lands.

However, human impulse has not only had negative consequences: Europe was also the place where the idea of democracy originated. Included in European history are also less pleasant phenomena such as crusades and missionary work, and in the 15th century a real boom of exploration journeys across much of the world began. In this way, almost all European countries became colonial powers and could benefit greatly from the trade of goods from the colonies. More recently, the history of Europe has been marked by world war, and most recently by new members of the European family as a number of countries in Central and Eastern Europe have become independent states.

The European countries can meet most people’s needs for an adventurous holiday. Based on population statistics done by countryaah, northern Europe is perfect for different nature experiences and trips focusing on wildlife. In Southern Europe, unique cultural and bathing vacations await, while the vast forests and wide rivers in Eastern Europe encourage river cruises. The fact that you do not have to travel to distant parts of the world for special holiday experiences, is discovered when you face a calving glacier in Greenland, enjoy the peaceful atmosphere of the Alhambra in Andalusia or almost get lost in the countless halls and comforts of the Winter Palace in Sankt. Petersburg.

Europe has many, but often small, mining opportunities for the extraction of metals (see section Mineral production). However, the iron ore deposits are significant. The largest are in Kryvyj Rih in Ukraine and in Kursk about 500 km south of Moscow. Kursk has one of the world’s largest magnetic anomalies, which indicates a very large iron ore supply. Other important assets are nickel, zinc, cobalt and copper in a belt from eastern Finland to the Skellefte field in Sweden and similar assets on the Kola Peninsula. The Navan in Ireland has Europe’s largest known zinc supply. Larger copper assets are also found in Poland. Of precious metals, gold is found in Sweden (Skellefte field) and in northern Spain, silver in Poland and silver and gold in Sierra Morena in southern Spain. Of other breakable occurrences are rock salts and potassium salts in Germany as well as phosphate resources on the Kola Peninsula (apatite) and in Estonia are of greatest importance.

Europe has relatively large energy resources (compare the section Energy). Intensive underground mining of coal has sometimes caused large settlements in the ground. Mining of coal is done in open-pit mines, which, like the use of lignite, presents serious environmental problems. Ireland, Sweden, Finland and the Russian Federation have large areas of peatland. However, mining of peat causes major interference in the landscape and in the ecological and hydrological balance. Geothermal energy is mainly used in Iceland, but also in Italy (Tuscany) and in France.

The rivers in the Pyrenees, the Alps and Scandinavia as well as in the Russian Federation are important energy resources. The rivers in the Mediterranean have uneven water flow, which makes their exploitation difficult. Important, however, is the use of rivers here for irrigation. In Western and Central Europe, the rivers are important transport routes. Many are also connected to channels.

The natural vegetation is always a resource in itself. Economically, the coniferous forests in Sweden, Finland and the Russian Federation are of the greatest importance. Tundra and alpine meadows are important natural pastures. Most of Europe’s arable land is cultivated. Most important are the brown soils in northwestern Europe and the loose soil belt from northern France via Hungary to Ukraine with their brown and black soils. However, the loose soils are seriously affected by soil erosion, which has been exacerbated by the creation of large fields, for example. in connection with the collectivization of agriculture in the former Eastern Europe. 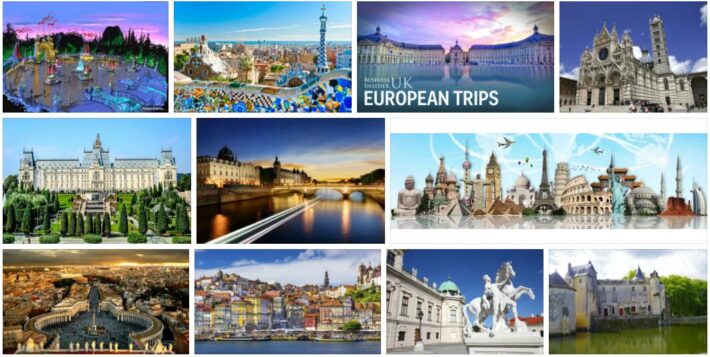