Croatia. Two thirds of voters voted in January for Croatia’s EU membership, but voter turnout was only 43.5%. Among the Naysayers were mainly right-wing nationalists, and they suffered a setback when the war criminal convicted former general Ante Gotovina expressed his support for membership, saying that Croatia belongs in the EU. Membership was expected to take effect in 2013.

In March, the Croatian Parliament approved the Accession Treaty, which was concluded with the EU in December 2011. Parliament in the EU’s existing member states did the same gradually over the year. One exception, however, was Slovenia, which demanded that an unresolved banking conflict with Croatia be resolved first. The two former Yugoslav republics disputed savings, which a large number of Croats claimed to have had in a Slovenian bank when Yugoslavia began to collapse in 1991.

Teachers, nurses and other public servants demonstrated in October, in protest of wage cuts and other cuts in the public sector, in the first major protest against the left-wing alliance that took place just under a year earlier.

In November, the war hero Gotovina and the co-accused General Mladen Markac˘, both of whom were sentenced to long prison sentences in 2011. According to the Supreme Court of the War Criminal Tribunal in The Hague where the judges were appealed, evidence was found that they were responsible for war crimes against Serbs in Krajina in 1995. cheering crowds as they returned to Croatia.

Former Prime Minister Ivo Sanader was sentenced in November to ten years in prison and € 5 million in fines for receiving millions in bribes from the Austrian bank Hypo in 1994 and from the Croatian oil company MOL 2009.

The economy was under severe pressure, and unemployment was just over 17%. A glimmer of light was reports that the tourist year seemed to be the best so far. Nearly 10 million foreign tourists visited Croatia in just two summer months.

The Croatian authorities’ unwillingness to arrest General Ante Gotovina caused the accession negotiations with the EU to stall during the year. Gotovina was wanted by the UN War Crimes Court in The Hague for war crimes, while in Croatia he was considered a war hero after he led the country’s conquest of Kraijna in 1995. At the end of the year, the EU and Croatia reached a joint agreement on Gotovina. In October negotiations were resumed and in December he was arrested in Spain.

In June 2007, the UN War Criminal Tribunal sentenced Serbian militia leader Milan Martic to 35 years in prison for murder and persecution while serving as police chief of the self-proclaimed Serbian Republic of Kraijna in the mid-90’s. He thus became the first war criminal from Kraijna to be sentenced in court.

Generals Ante Gotovina, Ivan Cermak and Mladen Markac were brought before the International Criminal Court for ex-Yugoslavia. They were charged with war crimes and crimes against humanity in connection with an offensive against rebel Serbs in 1995. The court tried on several occasions to obtain documents from Croatia, but in vain. The EU also intervened and put pressure on Zagreb.

Prime Minister Sanader surprisingly resigned on July 1, 2009. He was replaced in the post by his party mate Jadranka Kosor, who at the same time became the country’s first female prime minister. Upon his resignation, Sanader had declared that he was leaving politics and would never return. The categorical opinion lasted only ½ years. After the defeat of HDZ in the presidential election, Sanader declared that he would be back in politics. It was not popular in HDZ that threw him out the next day.

The resignation of Sanader in July, Croatia’s unwillingness to cooperate with the International Criminal Court for ex-Yugoslavia and a border dispute with Slovenia halted the country’s accession negotiations with the EU from mid-2009. Only in October did Slovenia give up its opposition to Croatia’s membership. 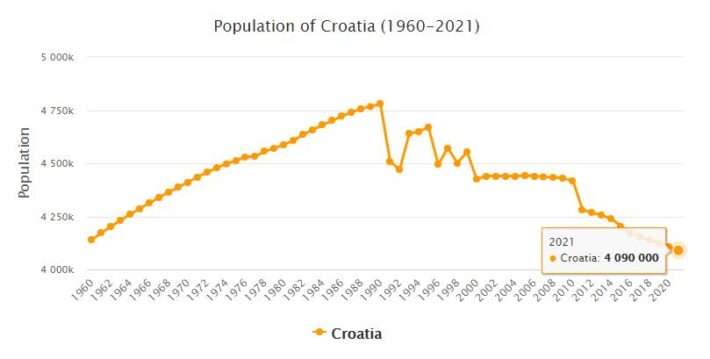