Lithuania. Relations between Lithuania and Poland continued to deteriorate during the year, and President Dalia Grybauskaite declared in May that Lithuania would take a break in its relationship with Poland. Grybauskaite accused Poland of choosing the Russian Federation as a friend, while Lithuania was turned into a scapegoat.

During the year, Lithuania lost a battle against Serbia over the presidency of the UN General Assembly from the autumn. Foreign Minister Audronius Ažubalis accused Serbia’s Allied Russian Federation of opposing his candidacy, and a spokesman for the Russian UN delegation also stated that “a person who does not understand the importance of victory over Nazism” cannot lead the General Assembly.

During the year, Ažubalis had been involved in controversies about the view of the Second World War. He criticized Lithuanian social democrats who objected to attempts to equate the Stalin regime’s assault with the Holocaust. According to Ažubalis, the difference between Hitler and Stalin was only the length of their mustaches, a statement that provoked outrage among Lithuanian Jews.

In July, the Social Democratic-led opposition in Parliament pushed for an advisory referendum to be held on the government’s plan to build a new nuclear reactor in Visaginas, the site of the now-closed Ignalina nuclear power plant. According to the opposition, the project would be too costly and unprofitable. The government had signed a preliminary agreement with Japanese Hitachi on the reactor construction, and the plan was to cooperate with Latvia and Estonia with the intention of making the Baltic independent of Russian energy.

The no campaign before the concerned referendum government, and when two Belarusian anti-nuclear activists were to attend a conference in Lithuania, they were refused entry. They were identified as potential threats to national security in Lithuania and other EU countries. The two activists had been persecuted in Belarus for their protests against the plans to build a Belarusian nuclear power plant.

In October, the government decided to sue the Kremlin-controlled Russian gas and oil giant Gazprom for a € 1.5 billion arbitration for incorrect pricing. Lithuania had the highest gas price in the EU and paid 15% more for Russian gas than its Baltic neighbors. Lithuania considered that the Russian Federation was avenged for Lithuania’s intention to implement the EU’s so-called third energy package, which would divide the gas company Lietuvos Dujos and take control of the gas pipelines from the Gazprom partner.

The government’s four-year term of office had coincided with the financial crisis and entailed tightening with tax increases and pension and salary reductions. The dissatisfaction was therefore strong, and before the parliamentary elections in October, the left opposition led clearly in the opinion of Prime Minister Andrius Kubilius’s conservative party and the liberal coalition partner. The election, which was held in two rounds, was also a great success for the left parties, with the Social Democrats (S) and the Labor Party nearly doubling their mandate numbers to 38 and 29, respectively, while the Conservative Confederation lost more than every fourth mandate and stayed on 33. Opposition Order and justice came in fourth place with 11 seats, followed by the Liberal movement with 10 seats and the Election Campaign for Poles in Lithuania with 8 seats.

The advisory referendum on nuclear power, held in parallel, became a clear victory for the downside. Nearly 63% voted against the construction of a new reactor, and 34% voted yes. It was unclear how results would affect the new government’s energy policy.

There were electoral fraud, and the Election Commission was set aside by Parliament to approve the entire election result despite the shortcomings.

The Social Democrats, the Labor Party, Order and Justice, and the Election Campaign for Poles in Lithuania negotiated a majority coalition, and in November S-leader Algirdas Butkevičius was given the president’s mandate to form a new government. However, the president wanted to exclude the Labor Party, as there were allegations of serious electoral fraud and because the party’s leader Viktor Uspaskich was charged with accounting and tax fraud in the party. The party joined the government, but not Uspaskich.

After the sharp fall in GDP during the crisis years, the economy had grown by close to 6% in 2011, and during the year growth was expected to be 3%, however, without rising to the pre-crisis level of GDP. The minimum wage was equivalent to SEK 2 125 and the minimum pension was SEK 1,125. Unemployment was close to 13% in August. The government projected a budget deficit of 3% in 2012. 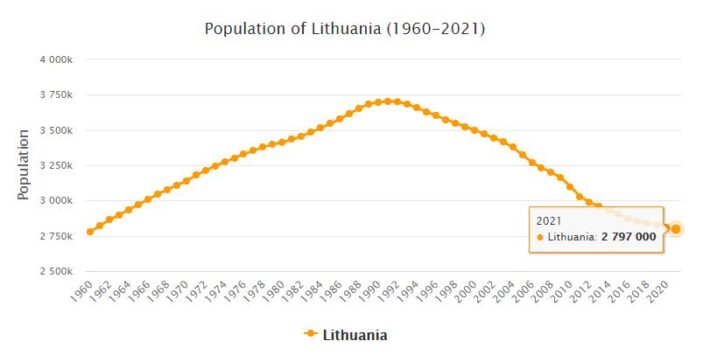