Greece. The economic crisis continued during the year to force wages, pensions and jobs to new bottom levels. The share of unemployed was 25% in November and every day another 1,000 jobs disappeared. Many people stood outside the welfare system. They applied for soup kitchens, children fainted at school due to a nutritional deficiency and many seriously ill became without medication as the pharmaceutical companies curtailed the credits to the state health insurance fund. Many residents found it particularly difficult to pay their electricity bills because, among other things, the property tax was collected that way. At the same time, crime statistics skyrocketed. The number of burglaries increased as people began to store large sums of money at home due to mistrust of the banks.

Among the most vulnerable were young people who were outside the labor market and the elderly, whose pensions had been cut and whose adult children, often unemployed, could no longer support them. The number of suicides increased especially in this group. The desperation also hit hard on refugees. Several thousands of paperless refugees were locked up in camps, and the human rights organization Amnesty International accused Greece of treating them as criminals. The number of racist hate crimes also increased.

The popular dissatisfaction shook the country’s leadership. During the winter and spring, a large number of MPs jumped off the established parties PASOK (All-Greek Socialist Movement) and New Democracy (ND, Conservative). Two new elections became necessary, the first May 6. ND and PASOK shared the message that the country must continue to swallow the austere austerity medicine in order for it to be integrated again into the world economy. Challengers, with the left-wing Syriza in the lead, said that austerity was exacerbating the situation by beating consumption. Syrian manager Alexis Tsipras promised that if he won, he would break all agreements with the lenders.

ND and Syriza both went forward while PASOK shrank. The world was shaken by the news that the neo-Nazi party Golden Dawn took 7% of the vote. ND, Syriza and PASOK failed in success to form government and a new election was held on June 17. Both ND and Syriza again advanced strongly; ND took 29.7% of the vote and Syriza 27.9. ND leader Antonis Samaras was able to form government with the support of PASOK and the Democratic Left (DIMAR).

At the same time, negotiations were underway between Greece and the so-called troika, ie the EU, the European Central Bank (ECB) and the International Monetary Fund (IMF). On February 21, the eurozone finance ministers gave a sign of a second and severely conditional rescue package, worth € 130 billion. Private lenders – i.e. banks, insurance companies and pension funds – were expected to contribute another 100 billion euros by reducing part of the debt in exchange for securing interest payments on remaining loans.

On November 27, the euro area countries gave the go-ahead for yet another rescue package worth SEK 43.7 billion to be paid in installments. That grant would allow Greece to buy back government securities at a discounted price from private banks. The overarching goal was that by 2020, the Greek central government’s share of GDP would reach 120%, which many analysts hoped to be unrealistic.

In exchange for the rescue package, the new government under Samaras pushed through new austerity in parliament, including a further reduction of the statutory minimum wage by 20% to EUR 751 per month, a reduction of the public sector by 150,000 jobs up to 2015, and savings in health care and an increase in the retirement age from 65 to 67 years. Each partial payment of the rescue package was conditional on additional austerity measures.

The country’s GDP continued to shrink for the fifth consecutive year. The decrease for 2012 was expected to be in line with the decrease in 2011, which was 6.9%. In October, however, the urgent risk of Greece going bankrupt and forcing the euro to be eliminated was considered.

Year 514 BC Hipparchos was murdered by the “tyrants” Harmodios and Aristogeiton. Hippias expelled in 510 BC with the help of Sparta. The power struggles after the fall of the Peisistratids led to Kleisthenes about 507 BC. was able to carry out a constitutional reform that became the basis of classical democracy. Citizens were divided into ten new counties. A council of 500 members, 50 from each file, was created. The old Areopa council remained, but lost much of its importance 487/486 and 462/461 BC. The new Council and the People’s Assembly, to which all citizens had access, were the most important political bodies.

The century’s politics were dominated by the wars against the Persian Empire and Sparta. The success of the Persian wars, especially the battle of Salami in 480 BC, gave the Athenians high reputation in the Greek world and became the beginning of Athens’ heyday as a lake nation. The conditions for this were the fleet, consisting of about 200 triads (triers), and the fortification of Piraeus, the port city of Athens; this was the result of the policy enforced by Themistocles and funded with silver from the mines in the Laurion area of ​​southern Attica. Faced with the threat of new Persian attacks, Athens joined allies with Greek states on the islands and on the west coast of Asia Minor, the so-called Attic Sea Federation (478/477 BC). Member States contributed ships and troops or an annual tribute in coins.

From about 460 to 429 BC Pericles was the leading politician in Athens. A settlement was reached about 450 BC. with the Persians, and a few years later made peace with Sparta. Athens, as leader of the Maritime Federation, was the most powerful state in Greece. By the mid-400s, only three of the Member States had their own fleets. The others paid tribute to the Federal Fund, which was transferred to Athens. 1/60 of the tributes went to the goddess Athena and was used in Pericles’ great building program. The Maritime Federation developed into an instrument for Athens’ power policy. The great importance of the fleet also meant that the thetars (the lowest class of citizens), who served as rowers, had an increased influence in politics.

The number of citizens (including only men) in the 400s has been estimated at 30,000. In addition, resident aliens (metoics) and a large number of slaves were added. The total population of Attica has been estimated at 200,000. Athens was dependent on cereals from the Black Sea coastal areas for its livelihood. In addition to the naval base, Piraeus was one of the busiest ports in the Mediterranean. Political life in Athens was intense, the number of offices large and the participation in politics more widespread than in other states. Athens was also a cultural center, where many philosophers and artists sought. Several of the classical masterpieces of tragedy and comedy, painting and sculpture were created by Athenians.

The contradiction between Athens and Sparta and its allies, the so-called Peloponnesian League, led in 431 BC. to the Peloponnesian War. Following the defeat of Aigospotamos, Athens was forced to capitulate 404 BC Peace conditions were tough. Among other things, the Piraeus fortress and the long walls must be demolished, the fleet surrendered and the sea association dissolved. A result of the defeat was a revolution, which resulted in a few empires and the ‘thirty tyrants’ regime of violence 404/403 BC. However, following Spartan pressure, reconciliation was achieved, and the democratic constitution was reinstated. Athens sought to regain its former position of power, and 394 BC the walls were rebuilt with Persian funds and in 378/377 they started to create a new naval association, which, however, did not reach the same extent as before. Peace between Sparta and the Persians 386 BC

From the mid-300s, Macedonia under Philip II was a threat to Athens, and Demosthenes advocated an anti-Macedonian policy. A coalition against Philip under Athens led defeat at Chaironeia 338 BC Athens was treated mildly by the victor, but its history was then marked by the dependence of Macedonia, which with shorter interruptions lasted until 229 BC. From about 200 BC, when Rome began to emerge as the dominant power, Athens pursued a Roman-friendly policy. However, they joined Mithridates VI ‘s rise against the Romans 88 BC, leading to Athens in 86 BC was taken by Sulla and plundered.

During Hellenistic times, Athens enjoyed great reputation as a center for philosophy and rhetoric as well as for its religious festivals. Princes and wealthy individuals favored the city in various ways. This relationship continued during the Roman emperor era, and especially the century AD. was a heyday with Emperors Hadrian and Herod Atticus as great benefactors. Year 267 AD large parts of Athens were destroyed by the Heruls. However, a recovery took place, and the philosophical schools, especially the New Platonic, were very active in the 300s and 400s. Year 529 AD the emperor Justinian forbade the pagan philosophers to teach, thus ceasing Athens’s role as a city of learning. In 582/583 the city was taken by slaves.

The medieval and modern history

Athens was transformed into a Byzantine provincial city during the 400s and 500s. At the same time, the city’s residents were Christianized, and most of the pagan temples became churches. Athens was placed under the patriarch of Constantinople, where many of the most precious works of art were carried. In the 8th century, Athens became the archbishop’s seat. After the Fourth Crusade in 1204, Athens became the center of a Latin duchy (cf. Latin Empire). The importance of the city diminished after the conquest of the Turks in 1458. The Parthenon, which was converted into a mosque, was badly damaged in 1687 during the Turks’ war with Venice (1684-99). A. was finally liberated from the Turks in 1833 and in 1834 became the capital of the newly formed state of Greece.

Industry, crafts and shipbuilding sixfold the area of ​​Athens from 1860 to 1920, while the city became an important port of emigration. In 1922, 300,000 refugees came to Athens from Asia Minor, Greek families displaced from their homes after the Greek army suffered defeat in the war against Turkey. Townhouses and new neighborhoods are reminiscent of the origin of the refugees, e. g. New Smyrna. During the 1930s, an attempt was made to gain control of the explosive development through a special Ministry of Athens. The German occupation of Athens during the Second World War lasted from April 1941 to October 1944. In the winter of 1941–42 alone, 150,000 people died in the city and its surroundings. During the post-war period, Athens’s population has grown sharply. 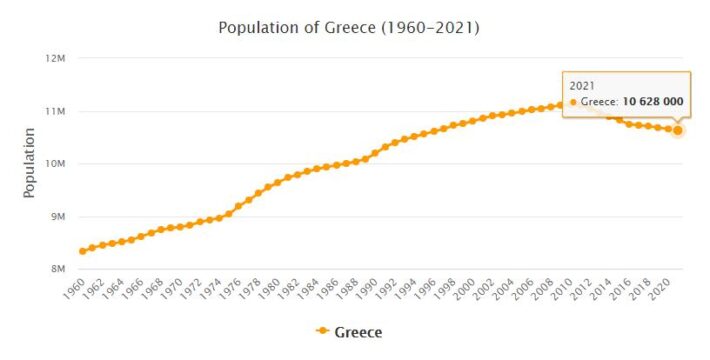