Ireland. The issue of the EU’s so-called financial pact, which, among other things, means stricter budgetary rules for member states, dominated politics in the spring. As it was a constitutional amendment, the Irish government had to let voters vote in a referendum, which was held on May 31. Most of the major parties pleaded for a yes to the pact; The exception was Republican Sinn Fein, who argued that a no would make it easier for Ireland to renegotiate the terms of its crisis loan from the EU and the International Monetary Fund (IMF). Jasidan won clearly with just over 60% of the vote. More than half of the voters participated in the election.

Even though it meant a clear victory, there was still a clear dissatisfaction with the two government parties, the bourgeois Fine Gael and the Social Democratic Labor. Particularly the latter of the parties lost in support of opinion polls, while Sinn Fein and its leader Gerry Adams gained a boost in opinion. Among Labor’s constituents there was a great dissatisfaction with the government’s tough austerity policy.

New cuts of € 130 million in healthcare also led to strong tensions within the government coalition. At the same time, the IMF felt that even greater savings would be made within the welfare system. In December, the government presented another savings package, this time the budget would be slimmed down by more than EUR 2 billion, including through reduced child support and the introduction of a new property tax.

The economic crisis persisted, but the bright spot was that the export industry was still doing relatively well. The Bank of Ireland, the only one of the country’s banks not taken over by the state in connection with the economic crisis, was able to show a small profit in February for the first time since 2008, thanks in large part to a tax refund. In March, it was announced that a major oil discovery had been made in the sea off Cork in the south.

At the same time, emigration from the country continued. From April 2011 to April 2012, more than 87,000 people had left, of whom just over half were Irish. Most people applied to the US, Canada and Australia.

In May, new demands were made for Sean Brady, leader of the Catholic Church in Ireland, to step down. According to a television documentary, the cardinal in 1975 had decided that the church would not report to the authorities that the priest Brendan Smyth was suspected of sexual assault against a 14-year-old boy. Smyth then went on to commit a series of new offenses before being sentenced in 1994 to four years in prison in Northern Ireland.

Ireland’s harsh abortion legislation came to the attention in November after a 31-year-old Indian dentist, Savita Halappanavar, a resident of Galway, had passed away after being denied an abortion. Although the doctors knew that the fetus could not survive, doctors at the Galway hospital refused to do the surgery as long as the fetal heart was beating. In several Irish cities, vigils were held to honor the dead woman and to protest against the abortion laws. Abortion opponents also gathered for manifestations. In 2010, in connection with three legal proceedings, Ireland had been criticized by the European Court of Human Rights for lacking clear legislation on what would apply if women’s lives were in danger. This is despite the fact that the Supreme Court already in the 1990s ruled that abortion would be allowed in such cases.

Vardkar apologizes for lack of judgment

Deputy Prime Minister (Tánaiste) Leo Varadkar apologizes in Parliament for showing a confidential agreement between the government and the Irish Medical Organization to a friend who worked for a rival company in April 2019, when he was prime minister. He admits that he broke his judgment. The apology comes after an article in the magazine Village where questions are asked about whether this is a crime. Varadkar says that he personally had nothing to gain from this, but just wanted to make sure he reached the best possible deal for the country’s general practitioner.

The Irish government has decided to shut down the country again for six weeks, which means that from 21 October it will move to the highest level in the action plan presented in September and follow the advice of the National Public Health Team. Emergency Team, NPHET) advocated earlier in October. The restrictions that are being introduced are largely the same as those that applied during the spring closure, with one important exception: schools and pre-schools must now be kept open (see March 2020). For example, residents are only allowed to walk a maximum of five kilometers from their homes, and can only spend time outdoors with people from another household. Anyone who violates this can be fined. Restaurants and pubs may offer takeaway food, and hotels and guest houses can receive guests if they have tasks that are considered vital. Worship services and other religious ceremonies may be held online. Weddings with 25 guests are allowed and ten mourners may attend funerals. Anyone who breaks the rules will be fined up to 500 euros. Legislation for this has not yet been adopted, so for the time being other penalties apply: anyone who violates the travel restrictions can be sentenced to a fine of 2,500 euros or imprisonment for up to six months. Mary Lou McDonald, who leads the main opposition party Sinn Féin, says she is behind the measures,

Finance Minister Paschal Donohoe presents his budget proposal for 2021, which is described as the largest in Ireland’s history. It includes extra investments of almost € 18 billion, in order to counter the corona crisis and the aftermath of Brexit, which could be particularly difficult for Ireland if the UK and the EU cannot agree on a trade agreement. A large part of the extra money will go to new public services, care and various stimulus measures to keep domestic demand up. Taxes remain in principle at the same level as before. Important exceptions are cigarettes and a carbon tax that will make fuel more expensive. The budget will run a deficit of 21.5 billion euros, and the national debt will rise to about 108 percent of GDP. The government also predicts that unemployment will rise to 10.5 percent. Among the losers in the budget are pensioners, where a planned pension increase is abolished, at the same time as some child allowances and fuel supplements are increased.

Ireland is now tightening corona restrictions once again, residents are being urged to work from home if it is not absolutely necessary to be in the workplace, new limits are being set on how many people can meet at the same time and sporting events must be held without an audience. The National Public Health Emergency Team (NPHET) had wanted even stricter restrictions, level five instead of the current level 3. But a new shutdown of the whole community would be unpopular and have serious economic consequences, according to the government. The spread of infection is on the rise, but not to the same levels as in the spring. Special local restrictions have already been introduced in Dublin and Donegal, where the number of cases of covid-19 is increasing the most.

The number of new cases of covid-19 in Ireland continues to increase. 613 new cases in one day are now reported, which is the highest figure since April. This means that Ireland has 100 new cases per 100,000 inhabitants, which is the 16th highest figure in Europe. A total of just over 1,800 people have died in covid-19 in the country. People over the age of 70 are now urged to be extra careful not to risk being infected. 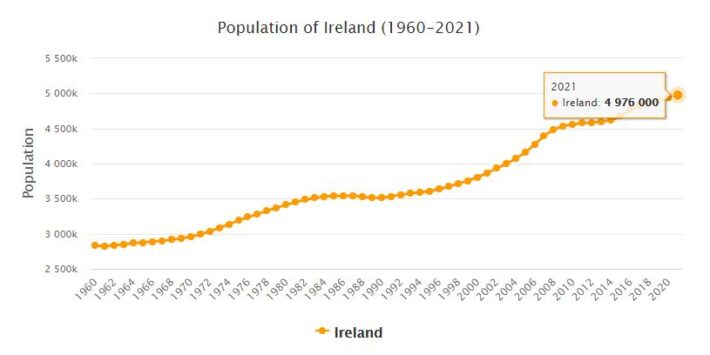