Germany. The criticism grew at the beginning of the year against President Christian Wulff after it was discovered that he had borrowed money privately from a business acquaintance when he was prime minister in Lower Saxony, denied that it happened, and then threatened a newspaper about the published information about it. When the state prosecutor opened a preliminary investigation, Wulff resigned. In March, the Federal Assembly – the members of the Federation Day and as many representatives of the states – elected Joachim Gauck as new president. Gauck, a former priest and civil rights fighter without a party name, won with a satisfactory majority over the Nazi hunter Beate Klarsfeld, who was the candidate of the Left. Gauck became Germany’s third president in just under two years; Wulff’s representative Horst Köhler also resigned prematurely.

Three state elections were held in the spring. The Christian Democratic CDU remained the largest in Saarland, but had to form a “big coalition” with the Social Democratic SPD since the previous coalition partners backed. In North Rhine-Westphalia, the SPD strengthened its already dominant position and formed a new government with the Greens. In Schleswig-Holstein, the bourgeois coalition fell, and an SPD-led government was formed with the Greens and the Danish-Frisian party SSW. In all three elections, the Pirate Party entered the state parliament. The party was previously only represented in Berlin.

A regional court in Cologne found that circumcision of boys for religious reasons violates the child’s rights and causes bodily harm. The rally did not directly imply a ban, but drew sharp criticism among Muslim and Jewish representatives who called it religious discrimination.

The crisis in the euro zone took a big place on the political agenda. When it came to the crunch, Chancellor Angela Merkel and her CDU received support from most of the opposition. In June, more than two thirds of the federation approved the EU financial pact and the permanent new crisis fund, ESM (European Stability Mechanism). Germany would become the main financier of the fund. A strong opinion opposed the ESM, and the Left and other critics requested that the Constitutional Court review the decision. The statement came in September: ESM was not found to be in violation of the Constitution. However, the Constitutional Court made certain reservations. Germany got contribute up to a maximum of EUR 190 billion, in addition a new decision was required on the Bundestag.

There were harsh criticisms from many parts of Europe against Germany’s emphasis on austerity, which many feared slowed growth and contributed to the euro zone falling into a new recession during the year. Many slogans were shouted against Merkel in demonstration trains in the crisis-hit countries of southern Europe. Germany itself seemed to be heading towards negative growth at the end of the year.

In September, the SPD appointed Peer Steinbrück as its chancellor candidate ahead of the 2013 election day. Steinbrück, who had no challenger within the party, was finance minister in the large coalition with the CDU, which the SPD entered into until 2009 but did not want to sit in a new government. with Merkel as Chancellor.

A fire in a workshop where the disabled worked in November claimed the lives of 14 people in Titisee-Neustadt in southwestern Germany.

The German economy grew until the crash of the Wall Street stock exchange in 1929. The country was now plunged into crisis due to the lack of external credits. In 1930, Hindenburg dissolved the parliament and in the subsequent elections both communists and national socialists (Nazis) went strong. The Nazi Party led by Adolf Hitler became the second most significant political force after the Social Democracy. The Nazis’ pledges to create a Great Germany, to cope with the post-World War I humiliation, and the implementation of a campaign responsible for the economic crisis on Communists and Jews, were steadily gaining support in the middle classes and the impoverished masses. The Communists and Social Democrats had been enemies since 1918. Therefore, they did not join Hitler when they actually had a majority, and realized only too late what danger he posed.

At the same time, with violent clashes with the Communists, the Nazi party doubled its vote in the 1932 election, gaining 37%. The president who had banned the Nazi public meetings now offered Hitler participation in a government led by the conservative Franz von Papen. Yet Hitler’s claim to become government leader was rejected.

In 1932-33, international negotiations were conducted in which Germany sought to be released for war damage compensation and regain the right to re-armament. The domestic crisis deepened and the number of unemployed reached 6 million. In January, at the invitation of the Citizenship, the President handed over the government power to Hitler, who in February dissolved parliament and printed elections in which the NSDAP gained absolute majority. In March 1933, the Parliament in Potsdam assigned Hitler the right to enact laws over the period of four years with the Constitution and without the prior approval of Parliament or the President. He was entitled to sovereignly draft the Finance Act, take out government loans, enter into agreements with other countries, transform the government and senior army leadership, and declare state of emergency. In July 1933, Hitler disbanded the federal system in Germany and introduced absolute central power, dissolved all political parties except his own, and banned unions and strikes. At international level, Hitler withdrew from the Disarmament Conference and the League of Nations.

The regime set up the first concentration camps where thousands of opposition, gypsies and gays were deployed. At the same time, a program for the physical annihilation of people with disabilities was initiated. Only protests from the church whose support was still important to the regime were temporarily put an end to this program. With the “Nuremberg Laws” of 1935, the regime legally reaffirmed its racist ideology, thus laying the foundations for its later extermination policy towards ethnic and religious minorities.

From Hindenburg’s death in August 1934, ministers were forced to give personal allegiance to the Chancellor. In 1935, Hitler began the German rearmament in open violation of the Treaty of Versailles. The European countries protested, but did not pose serious obstacles. In October 1936, Germany and Italy signed a cooperation agreement which implied support for General Franco in the Spanish Civil War. In November, Germany and Japan signed an agreement on military cooperation. The following year, the three Axis powers, Germany, Italy and Japan, entered into the Anti-Communist Covenant in Rome.

Many different industries are represented in Berlin, which is Germany’s largest industrial city. The electronics industry plays a special role, but also the iron and metal industry, the machinery industry, the clothing and food industry as well as the chemical and graphic industry are richly represented.

In addition to AEG and Siemens, which have built an entire district, Siemensstadt, for the company and its employees in the Spandau district, there is the pharmaceutical company Schering, which as the only large company retained its headquarters in Berlin during the years Germany was divided.

Large industrial areas dominate both east and west, and special centers of gravity for industry are located by the Spree and by the major canals and railways. Berlin is an important trade fair city (see Messe Berlin); In connection with the old exhibition grounds (Messegelände) around Funkturm in the district Charlottenburg-Wilmersdorf, an extensive international congress center (ICC Berlin) was built in the 1980’s, which was to help secure Berlin’s position as an international trade fair city.

In Berlin, there is a well-functioning public transport network with buses, trams, metro lines, S-Bahn and U-Bahn. The S-Bahn (Stadt-Bahn) was started in 1871 to connect the railways that entered the city. The subway was opened in 1902 and is still under construction.

When the city was divided, the collective system was also divided. Now the lines across the former sector border have been re-established and a single company, Berliner Verkehrsbetriebe (BVG), has been created, which handles all public transport with the exception of the S-Bahn, which is operated by Deutsche Bahn.

Before 2006, Berlin had never had a central railway station, but instead nine main railway stations. In the summer of 2006, Europe’s largest transit station, the Berliner Hauptbahnhof Lehrter Bahnhof, was inaugurated.

Ship traffic is also of great importance. In addition to its rivers, Berlin has a dozen major canals and both an eastern and a western port with canal connections to the Baltic Sea and the North Sea.

Air traffic has played an important role since World War II, especially for West Berlin. The city has three airports: Tegel and Gatow (military airport since 1994) in former West Berlin and Schönefeld just outside the city limits of former East Berlin.

Until 1991, air services to West Berlin were only operated by the United States (Pan Am), France (Air France) and the United Kingdom (British Airways) as cabotage flights, while Schönefeld was used by the GDR state airline, Interflug, which similarly had no rights to fly over or over Federal Republic.

In addition to a number of international routes and charter traffic from Schönefeld, Interflug also maintained domestic routes to Barth (Stralsund), Dresden, Erfurt, Leipzig and Karl-Marx-Stadt.

In 2006, an extension of Schönefeld as a major airport for Berlin-Brandenburg was launched. This is expected to be taken into use in June 2012.

In this regard, the Tempelhof was closed in 2008, while Tegel is expected to close in 2012. 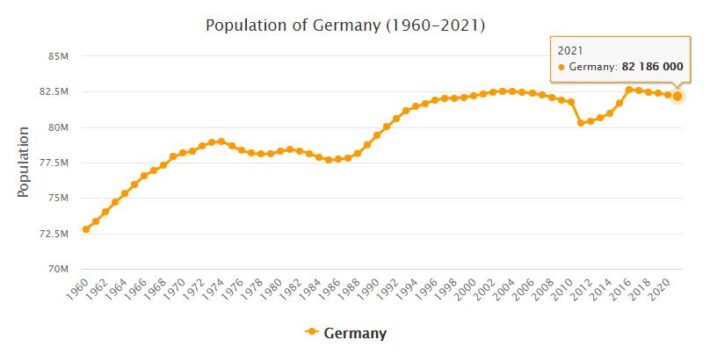