Armenia. France’s Senate voted in January to criminalize the denial of mass murder of Armenians during the Ottoman Empire in the 1910s. The crime can be punishable by imprisonment and fines. The decision was enthusiastically welcomed in Armenia but meant that the country’s historical conflict with Turkey was given new fuel.

Before the spring parliamentary elections in Armenia, the opposition demanded that all members be appointed proportionally on party lists, rather than some being elected in one-man constituencies, where voters according to the opposition are more vulnerable to the regime’s pressure and attempts to vote.

These and other reform demands were rejected by President Serzh Sarkisian’s party, which was successful in the May elections. The Republican Party grew strongly, taking 44% of the vote and gaining its own majority in Parliament. A successful Armenia, with multimillionaire Gagik Tsarukian in the lead, doubled to 30%. The third coalition party, the Rule of Law Party, just passed the five percent barrier. The Armenian National Congress in opposition, which ran for the first time chaired by former President Levon Ter-Petrosian, took 7% of the vote. There were many allegations of electoral fraud, but the regime stepped out of the election.

In June, several Armenian and Azerbaijani soldiers were shot dead at the border and in the disputed area of Nagorno-Karabakh. It happened while US Secretary of State Hillary Clinton visited the region and called for calm.

Concerns grew when Azerbaijan released a life-long Azerbaijani lieutenant who ax-murdered an Armenian officer in August. The murder had taken place in Hungary, from where the lieutenant was extradited to Azerbaijan with conditions for continued imprisonment. Instead, the convicted was released as a hero, promoted to major and received financial benefits. Armenia severed diplomatic relations with Hungary and did not rule out the idea of a new war against Azerbaijan.

Thousands of Armenians came during the year as refugees to Armenia from the war-torn Aleppo in Syria, where there has been a large Armenian population since the Ottoman period. Many Armenians in Syria have regarded the al-Assad regime as a protection of the Christian minority, and the relationship between President Bashar al-Assad and the Armenian leadership has been good. The government in Yerevan, therefore, sought to deal with the conflict in Syria with caution because a new regime could threaten the Armenians in the country.

Armenia proudly markets itself as the first country in the world to adopt Christianity as a state religion (year 301). Therefore, it was an unpleasant surprise for many Armenians when an expert commission declared during the year that nearly half of the 24,000 churches and other religious monuments in the country are in urgent need of restoration. Nearly a third is considered to be on the verge of collapse. 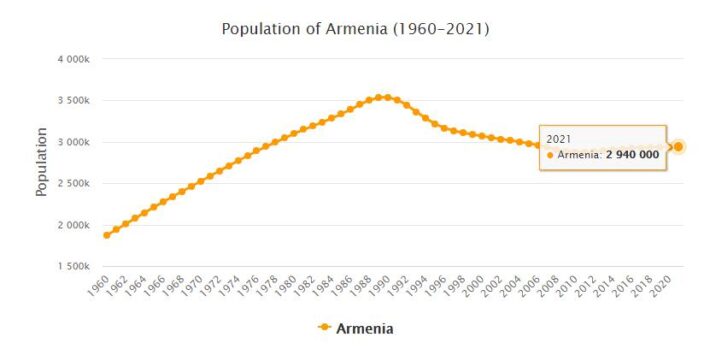 ARMENIA. – In the Armenian Soviet Socialist Republic, Lake Sevan has been greatly reduced in surface area since 1930 (from 1393 to only 240 km 2), draining the swampy area of ​​the SE and restricting it to the deepest part of the NW; along the course of its main emissary, the Zanga river, a tributary of the Arasse, 8 hydroelectric power plants were installed (the main one at Kanaker), which allowed the rise of the aluminum and synthetic rubber industry, while the irrigated area was considerably extended. Among the industrial centers, the main one is Erivan ′, which has grown from 65,000 residents in 1926 to 509 thousand in 1959, home to factories of spare parts for cars and watches. Leninakan, the seat of textile and canning industries, is also in progress. In the outskirts of this city, following the opening of an irrigation canal, the cultivation of sugar beet is in progress. The movement of repatriation of Armenians from neighboring countries (and especially from Turkey) reached its maximum intensity around 1948 and then diminished; notable groups of Armenians remain in Georgia (380,000), Azerbaijan (360,000) and other Russian regions (330,000).