Albania. Nineteen people were sentenced in March to between 1 and 18 years in prison for the severe explosion in an armistice outside the capital Tirana in 2008, when 26 people were killed.

In May, Parliament granted the EU legal representation in Kosovo, EULEX, to investigate allegations in Albania that the former Kosovo Albanian guerrilla UCK engaged in trafficking in civilian Serbs bodies during the Kosovo war of 1997-99. According to a parliamentarian, the purpose was “once and for all” to show that the charges were false.

Parliament adopted amendments to the electoral law and approved restrictions on prosecutorial immunity for MEPs and senior civil servants, in accordance with EU requirements. The changes were also approved by the Socialist Party, which was in opposition. It helped the EU Commission in October recommend that Albania be granted candidate status.

Twenty former political prisoners launched a hunger strike in September in protest of missing compensation for sitting in jail during the communist era. The government promised compensation in 2007. Two of the dissidents set fire to themselves in protest and one of them died in November of their injuries.

Similarly, in 2003, the EU and Albania took the first steps along the path that will lead to Albanian accession to the Union.

In January 2004, at least 20 Albanians died aboard a ship trying to reach the Italian coast. It was illegal human trafficking. Acc. the Italian coastguard who participated in the rescue work had 11 survivors, whose condition was critical, however. Albanian police launched an investigation that led to the arrest of at least two people. One of the accused – who also led the ship – was the son of a local official in the northern city of Shkoder. The smuggling of people from Albania to Italy has in recent years moved down to second place after the smuggling from Africa. The last major shipwreck occurred in May 2000, when 15 Albanians died after their boat had collided with a boat from the Italian police.

In December, the prime ministers of Albania, Bulgaria and Macedonia signed an agreement on the construction of oil pipelines across the Balkans. It has to transport 750,000 barrels of oil daily. The pipeline will run 900 km from the Bulgarian Black Sea town of Burgas to Viore on the Albanian Adriatic coast. The project was originally drafted in 1994, but was postponed due to doubts as to whether there was sufficient demand. The construction responsibility lies with the Albanian Macedonian Bulgarian Oil Corporation (AMBO), which is registered in the United States. Fatos Nano stated that it was one of the most important infrastructure projects in the region.

The opposition party DP, led by Sali Berisha, won the parliamentary elections in July 2005. The party gained 55 seats against Nanos 41. The voting percentage at the election reached 56%. Acc. international observers only partially met the standards, as there were many problems and complaints throughout the process.

In an attempt to overcome the country’s severe energy crisis, in April 2006, Berisha signed an agreement with a multinational consortium of Swiss, Italian and North American capital on the construction of plants in Albania’s southern part for gas and electricity production. Acc. by 2009, the consortium will build an electric power plant with a capacity of 1,200 MW and a facility that will be able to supply DKK 10 billion annually. m 3 gas. 80% of production must be exported to Europe through an underground gas pipeline between Albania and Italy.

In June 2007, US President George W. Bush visited Albania and categorically stated himself as a supporter of Kosovo’s independence.

After four votes in parliament, in July 2007, Bamir Topi of the Democratic Party succeeded in being elected president. Only in the 4th and last vote did he manage to get the necessary 84 votes.

In March 2008, a gunfire burst into the air in the village of Gërdec near Tirana, killing 26. The disaster became a national scandal and forced the Secretary of Defense to resign. There were a large number of irregularities around the waste site where an Albanian company dismantled aging Albanian weapons and explosives and sold them as waste.

The June 2009 election saw a significant decline for Sali Barisha’s Democratic Party, which officially got 40.18% of the vote, while the largest opposition party, the Socialist Party, got 40.85%. The government alliance got a total of 46.92%, while the opposition alliance had to settle for 45.34%. Berisha could only continue on the prime minister’s post by forming an alliance with one of the opposition’s small socialist parties. There were reports of widespread electoral fraud. The country was admitted to NATO that same year, but due to political instability, the EU refused the following years to include Albania as a candidate country.

Albania’s economy did well during the global economic crisis that erupted in 2008. In 2009, the economy grew by 6%.

In January 2011, a video was published showing the Deputy Prime Minister entering into an agreement on corruption with the Minister of Economy. On January 21, the opposition therefore held a large demonstration in Tirana with around 200,000 participants under the slogan that the Deputy Prime Minister should resign. It clashed with the security forces and 4 protesters were killed. Again, on January 28 and February 4, new demonstrations were turned against the government. 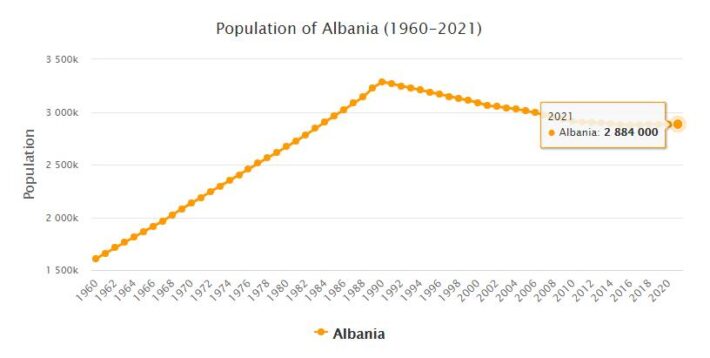