Solomon Islands. During the year, the European Commission proposed that Solomon Islands and 15 other island nations in the Pacific, for example, be granted visa-free access to EU member states. The European Parliament must approve the proposal.

A murder of a prominent official in the capital Honiara in April led to a vengeance attack on a poor residential area on the outskirts of the capital, where several houses were burnt down during the death threats to residents. The population was very critical of the police’s late reaction, and the incident sparked debate about the Solomon Islands being ready for the 2013 withdrawal of the Australia-led peacekeeping force that has been on the islands since 2003.

The rich stock of tuna around the Solomon Islands has declined in recent years. One of three major species, big-eyed tuna, is overfished, and environmental groups claim that a second species is at risk. Between 25 and 45% of fishing is believed to be illegal or without reporting. Climate warming of the seawater is also expected to cause tuna around the Solomon Islands to be driven further east and the coastal fisheries will decrease.

In order to gain better control over fishing, the government decided during the year to tighten the rules for tuna fishing. Licenses shall primarily be given to fishing companies that invest in the fishing industry onshore and take ashore their catch in the Solomon Islands.

During the year, the international network TRAFFIC, which surveys trade in wildlife, raised the alarm that over 50,000 parrots, cockatoos and other exotic birds were exported from the Solomon Islands in a decade. Some of the 35 species sold from the country are on the list of endangered birds, such as the acutely endangered yellow-tailed cockatoo and blue paradise bird. 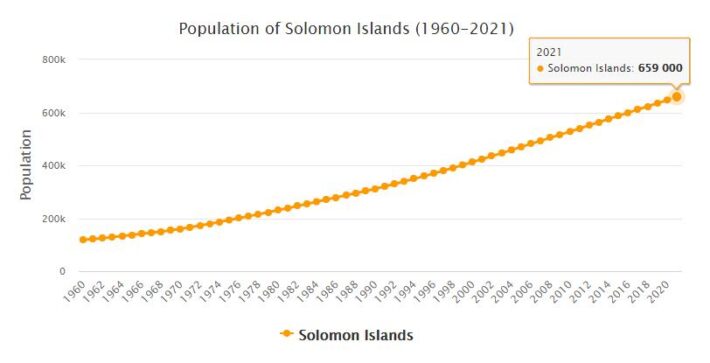 In the five-year period 1986-91, the average annual growth rate of the population was 2.9%. The gross national product per capita in 1991 it was valued by the World Bank at around US $ 560. Agriculture (including hunting, forest and fishing) occupies about 28.8% of the active population and contributes 70% to the formation of GNP. Almost all of the workers in the sector are dedicated to subsistence agriculture (potatoes, taro, coconuts, fruit and vegetables). The diffusion of crops destined for export is limited: the main plantations concern palm oil, copra and cocoa. The production framework has recently diversified thanks to the development of livestock farming (13,000 cattle in 1992 and 54,000 pigs), fishing (69,292 tonnes of fish caught in 1991) and the exploitation of forestry assets (449,000 m 3of timber in 1991). Further progress of the local economy is hampered by the almost total lack of efficient communication routes, so transport by small boats linking the islands is the most widely used means. Maritime services are also, for the most part, the services that connect the country with the main states of Oceania, Europe and Japan and which are headed by the port of Honiara. The archipelago has three international airports. Foreign trade has Japan as privileged partners for exports (41.3% of the total) and Australia for imports (32.3%); outgoing goods are mainly represented by fish, copra, timber and palm oil; those coming in from industrial products, food products and oil.