Niger. International Rescue Children’s Mothers Index 2012 placed Niger in last place among 165 countries. Niger is the worst country in the world for mothers, according to Save the Children’s review of women’s and children’s living conditions. Nearly a third of Niger’s children are malnourished and every seventh child dies before the age of 5. Girls in Niger receive an average of four years of schooling and live 56 years.

After the growth due to drought and pests, the famine became acute during the year. The crisis was exacerbated by the violence in the northern part of neighboring Nigeria, from which many fled to Niger. The afflicted country also received many refugees from the civil disputes in neighboring Mali.

A large part of the Sahel region was starved, but in Niger the situation was the worst. Niger is one of the world’s poorest countries with chronically severe malnutrition among children, making resistance during famine periods weak. In March, it was estimated that more than six million people in Niger needed immediate help. The severe mist growth meant that the hunger period fell earlier than usual, and the time without food supply until the next harvest in October became longer.

But outsiders believe that Niger’s new democratic government (since 2011) has been quick to detect the first signs that this year’s food crisis would be particularly difficult. The cooperation between the Nigerian authorities and international donors was described as excellent. According to the head of the UN Food Program in Niger, this could lead to long-term change in the country.

In March, Niger arrested a former Tuareg cleric leader who was close associate of Libya’s overthrown dictator Muammar al-Khadaffi. He was suspected of smuggling weapons and explosives from Libya. The rebel leader led a rebellion among Tuar rule in 2007–09 against the Niger regime but then became one of al-Khadaffi’s confidants.

The Tuaregrebel’s advance in Mali during the year created concern in Niger, where the northern part of the country was largely lawless with the advance of armed Islamists or bandit gangs. In August, the EU announced that it would support Nigerian security forces to fight terror and organized crime by assisting international experts in training police and national security.

Floods in the Niger River in August caused at least 65 casualties and forced about 125,000 people to flee their homes. The country’s president appealed for international help. The capital Niamey was also hit when the river banks erupted. According to some data, the river reached levels not seen since the 1920s. 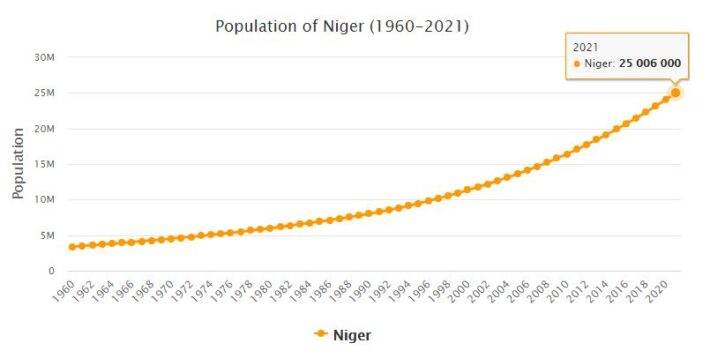 The territory consists, broadly speaking, of a vast semi-desert plateau, with altitudes of 200-450 m asl, interrupted in the central part by the imposing Aïr massif (1900 m), consisting of an ancient crystalline base surmounted by volcanic formations relatively recent (Tertiary and early Quaternary). NE of the Aïr, beyond the sandy Ténéré desert, the monotony of the landscape is interrupted by the Djado plateau, an offshoot of the south-eastern Algerian mountains.