Suriname. Gold mining in the southeastern part of neighboring Guyana created new tensions between the two countries during the year. Guyana, with a gold tax of 5%, accused Suriname of encouraging smuggling across the border and tax evasion for the government of Guiana with a gold tax of just 1%. Surinam President Desi Bouterse defended the level of taxation that the country needs to attract foreign capital, primarily Canadian, but also said he intended to try to get through a congress proposal to raise the tax to 3%. In November, the Government of Suriname signed an agreement with the Canadian mining company Iamgold to extend the extraction in the rich Rosebel gold mine 8 km south of the capital Paramaribo.

The Netherlands suspended its aid payments to Suriname in April after the Surinamese parliament approved an amnesty which includes President Bouterse himself. He and 25 other people are suspected of multiple murders of oppositionists in the country. 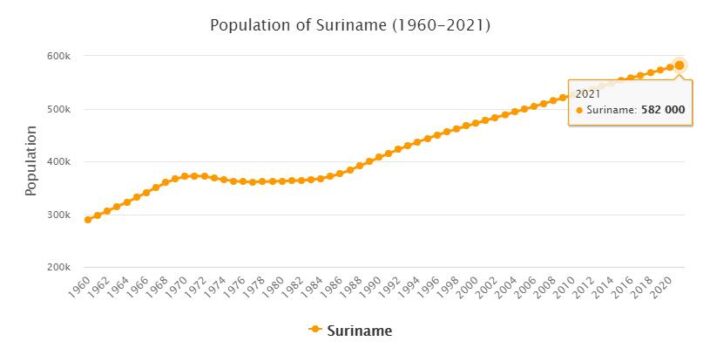 Inhabited by the Surinen (population from which it would have taken its name), which they replaced in historical times by Indi Caribi and Arawak, the territory was colonized in the mid-17th century. by the British, who started a thriving plantation economy (sugar, cocoa, coffee), based on the use of African slaves. Ceded to the Netherlands (1667) and later named Dutch Guiana, the colony was shaken in the 18th century. by frequent slave rebellions; took refuge in the forests, some of them (whose descendants are called bosch neger) gave birth to a tribal society, whose autonomy was recognized by the Dutch authorities with a treaty of 1760. Dispute between Great Britain, France and the Netherlands, sovereignty over the territory was definitively attributed to the latter in 1815. The Dutch solved the abolition of slavery (1863) and the consequent shortage of manpower by resorting to Asian workers; the plantations were gradually replaced by rice cultivation and fruit production.

In 1954, Dutch Guiana gained self-government within the Kingdom of the Netherlands. In the following twenty years, political life was characterized by the confrontation between the National Party of the Suriname (PNS), an expression of the black and mulatto majority, in favor of independence, and the Progressive Reformist Party (PPR), supported by the Asians, which advocated the maintenance of ties. with the Netherlands. After independence (25 November 1975), in 1980 the nationalist government headed by H. Arron was overthrown by a military coup; the military junta, chaired by D. Bouterse, after the imposition of martial law in 1982, was forced to appoint an assembly to draft a new Constitution, approved in 1987. The elections of that year saw the victory of the Front for Democracy and Development (FDS), a coalition between PNS, R. Shankar. In 1990 the military overthrew Shankar and called new elections, but they were won by the New Front (NF), the 1987 coalition strengthened by the Suriname Labor Party. The new government concluded an economic assistance agreement with the Netherlands and promoted constitutional changes to limit the influence of the armed forces. In 1995 the Suriname became part of the Caribbean community. In the 1996 elections, the NF lost its absolute majority, while Bouterse’s National Democratic Party (PND) was strengthened, succeeding in creating a coalition government and having one of its men, J. Wijdenbosch, elected president of the Republic. Overwhelmed by scandals and social protests, in 2000 the government suffered a heavy defeat in the political elections, won by the NF. R. Venetiaan, former head of state from 1991 to 1996, was re-elected president in 2000 and confirmed in 2005. As leader of the PND Bouterse returned to win the elections in 2010, becoming president; reconfirmed in 2015, in 2019 he was sentenced to 20 years in prison for having ordered the killing of numerous political opponents in 1982.