Congo. About 240 people were killed and more than 2,300 injured when a gunfire exploded in the capital, Brazzaville, on March 4. According to the authorities, the fire was caused by a short circuit in the power lines. The explosion started at 8 am on Sunday morning and felt right into neighboring Congo (Kinshasa) on the other side of the Congo River. 17,000 people became homeless and some of them were evacuated to temporary housing. In addition to people, numerous homes and other buildings were damaged in the area.

Authorities singled out Defense Minister Charles Zacharie Bowao as ultimately responsible for the explosion, and he was accused of being careless and nonchalant. In September, Bowao was dismissed from his post and in October he was prosecuted. Bowao himself claimed that the government had appointed him a scapegoat and that there were political reasons behind it. Twenty-six other people, most of the military, were also prosecuted as partly responsible for the accident.

In the parliamentary elections, which were held in two rounds on July 15 and August 5, the government alliance with the Congolese Workers’ Party (PCT) won the lead. They received 108 of the 136 seats in parliament. That meant some decline for the government alliance, but it still retained its large majority in Parliament. The largest opposition party, the Pan-African Social Democratic Union (UPADS), got seven seats.

Like previous elections, this was criticized for irregularities. According to the opposition, the government used media and government institutions to convey its message during the election campaign. In the past, the opposition has demanded the establishment of an independent election commission, which foreign election observers have also proposed. 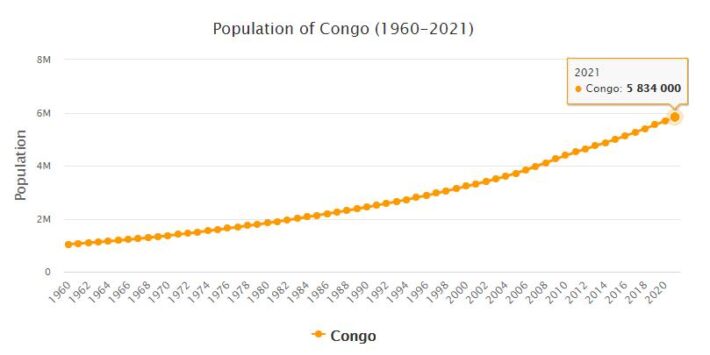 Central-West African state. At the 1996 census the population was 2,591,271 residents, but according to some estimates it increased to 3,999,000 in 2005, due to an increase among the highest in the world, equal to an annual average of 3 % in the period 2000-2005.. The low average density value (11.6 residents / km 2 in 2005) does not express the real distribution on the territory, as the demographic concentration in the capital and its surroundings has increased, hosting more than a third of the total residents. Moreover, most of these have little prospects of insertion in the production system of Brazzaville itself. The long period of internal instability had repercussions on the economic situation, and the already precarious conditions of the population worsened further in the last years of the 20th century. and in the early 21st century: the per capita consumption of electricity (a synthetic indicator to measure the level of economic development of a country) had dropped from 254 kWh in 1990 to 83in 1998, to go back to 150 in 2003 (at the same date it was 12,362 in the United States and 5021 in Italy). In 2003, 5 % of the adult population was ill with AIDS; in 2005 life expectancy at birth was 51 years for males and 53 years for females and infant mortality of 85%, while half of the children stopped schooling due to civil wars.

With a per capita income of 800 dollars in 2005, the country denounces a serious situation of backwardness, made even more dramatic, as well as by the strong rate of demographic increase, by the civil wars that have affected the Republic of Congo for long years, by the heavy foreign debt (8.4 billion dollars in 2003) and the variability of oil prices on international markets, a good that the country is well endowed with (in 2004 the production of crude oil was 12.3 million of t, and accounted for 90 % of exports and 60% of GDP) and of which it is the fourth largest producer in Africa south of the Sahara. After oil, the second economic resource is represented by forest exploitation, which is almost exclusively in the hands of private operators, local and foreign. Production, which in 2003 amounted to 2,436,715 m 3, is susceptible to improvements, as long as the processing of raw wood on site develops rapidly, especially since in 2003 new legislation came into force which sets quantitative limits. export of unprocessed timber. As for agriculture, less than 2% of the land area is devoted to arable land and arborescent crops; consequently the Republic of Congo has not achieved food self-sufficiency and is forced to import 80 % of its needs. Industry has little importance, which includes only a few chemical and petrochemical plants, food, textile and footwear, tobacco and cement factories.

In 2004 the railway line linking Brazzaville to Pointe-Noire (512 km) and extending towards Gabon (285 km) was privatized: the new operator had the task of rehabilitating this infrastructure, essential for national economic development..