Namibia. In February, the IMF noted that Namibia had handled the effects of the international financial crisis well, but economic growth was again on the decline, partly due to reduced demand for minerals. An annual growth of 7% was considered necessary to reduce the severe unemployment and tackle poverty.

The state-owned railway company TransNamib’s chief was dismissed in May after the company lost the equivalent of several hundred million SEK due to fraud. The railway manager had previously been acquitted of a series of corruption charges since the ruling SWAPO party joined the case. Now a confidential report showed rampant corruption in the railroad company, one of 53 state-owned companies that has largely been used to reward deserving loyalists. Several managers have been charged with incompetence or corruption.

During the period 2000–10, the state-owned companies received nearly SEK 1 billion in subsidies (except for crisis purchases), but only returned one-seventh of it in profit. Only four companies showed profit. The Ministry of Finance estimated that the state companies needed more than SEK 2 billion in 2011–13 to meet their commitments.

Namibia received criticism during the year from animal rights organizations for the plans to capture and send close to 150 wildlife to a zoo outside Havana in Cuba. Lions, elephants, rhinos and leopards would be included in what was called Noah’s Ark II, even though it was about air transport.

In July, reports came that German geologists discovered a gigantic underground water source in the arid desert of Namibia, near the border with Angola. The reservoir, a few hundred meters below ground level, is considered to hold five billion cubic meters and is believed to have existed as far back as the Stone Age. The water is of good quality and the amount is expected to be enough for the needs of Northern Namibia for four centuries ahead, with today’s consumption. The water reservoir was considered to be able to radically change the conditions for agriculture in the area.

In November, a wild strike broke out among teachers, mainly in the countryside. Despite court orders for teachers to return to classrooms, they continued the strike and some demanded salary increases of 40%. Negotiations had then been going on since last year with no results. The nurses had also been on strike for a long time with demands for better wages and working conditions without earning a hearing. The government illegally declared their strike by declaring health care as a necessary service. 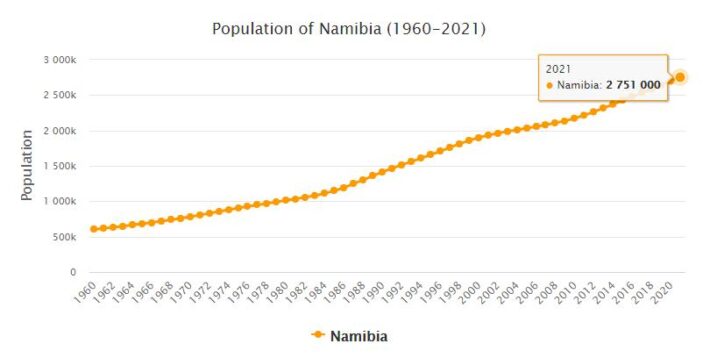 Demography and economic geography. – State of southwestern Africa. With an annual growth of 1.9% (2010-15), the population (2,347,988 residents, according to an estimate by UNDESA, United Nations De partment of Economic and Social Affairs, of 2014), 89% literate (source government, April 2014), enjoys a medium-high GDP per capita at purchasing power parity (PPA) ($ 10,764) and occupies 127th place in the Human Development Index. Among the cities, only the capital, Windhoek (325,858 residents), Reaches a certain size. However, unemployment, inequality remain (42% of the residents are in a state of poverty) and the spread of AIDS / HIV (Acquired Immune Deficiency Syndrome / Human Immunodeficiency Virus), with 250,000 affected people, which weighs on life expectancy (64.5 years, 2013). With a production structure that has remained unchanged in recent decades, GDP (+ 5% on average since the 2009 crisis) is based on mineral resources (diamonds, uranium), tourism and fishing; public investments are also important. For 40% of the residents, agriculture is the main source of income.