Mozambique. In March, police raided the former RENAMO rebel camps in Nampula in the north, where leader Afonso Dhlakama was arrested following a fire that claimed the deaths. Dhlakama was placed under house arrest. It was the first time the police and the exbells had been fighting since the end of the civil war two decades earlier.

In April, Portugal agreed to sell its remaining stake in the huge power plant dam Cabora Bassa. This set the point for a protracted dispute between Mozambique and the former colonial power. The Portuguese built the dam and maintained control over it after Mozambique’s independence, but in 2007 Portugal gave up most of its ownership. An agreement has now been signed that the entire dam will be owned by Mozambique from 2014. The dam in the Zambezi River produces electricity for Mozambique, South Africa and Zimbabwe.

Mozambique’s economy was expected to grow by over 7% in 2012, one of the best numbers in the world. At the same time, the former colonial power of Portugal was in deep recession, and Portuguese companies were keen to do business in economically growing Mozambique. Because of the crisis, tens of thousands of Portuguese also left their country, and many went to Mozambique to seek livelihood.

The capital of Maputo port during the year became the focus of interest from large companies exporting coal from South Africa. Transports that had previously departed from South African ports were being diverted to Maputo, where extensive refurbishment was underway.

The Swedish aid agency Sida suspended its cooperation with the provincial government in Niassa in Mozambique during the year due to corruption in the aid. Sida demanded a return of more than SEK 3 million. 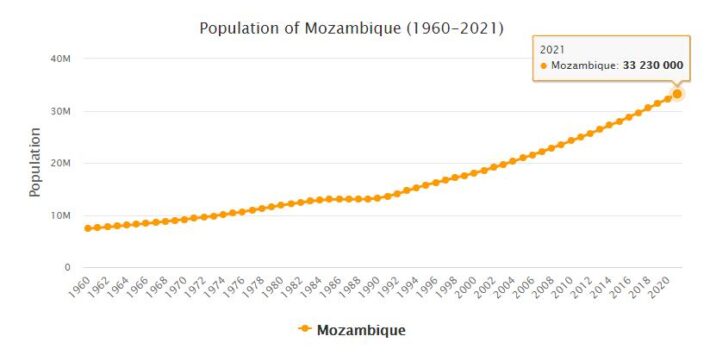 After the events that led to independence from Portugal (1975) and the end of the civil war (1992), Mozambique has not yet managed to achieve the conditions to get out of a situation of serious underdevelopment determined first by Portuguese colonial policy, then by the interference on the national economy by South Africa and by the uncertain political and social choices of the national government.

North of the Zambezi River, which divides Mozambique into the two large ethnic areas of the central Bantu in the north and the southern Bantu in the south, the most important ethnic group is that of the Makua-Lomwe, who represent about 52% of the entire population. and which are largely Islamized; towards the border with Malawi there is the Yao group, while to the north, towards the Ruvuma valley, live the Makonde, who have led the guerrilla war against the Portuguese with particular hardness and who maintain their animist and strongly xenophobic culture. North of the river also live the Nyanja and Chewa, while on the coast there are small Swahili groups. In the south of the Zambezi the most important group is that of the Thonga (24%), specialized in mining in South Africa; on the coast live the Chopi, of higher culture than the average, and the Shona, which also inhabit a large part of the territory of Zimbabwe. Together with many other minor groups, all these ethnic groups contribute to complicate the social and cultural framework of Mozambique and to make internal cohesion difficult.

After independence, the economy suffered a profound crisis both due to the departure of Portuguese technicians and administrators, who could not be validly replaced by the new indigenous ruling class, and because immediately a bloody civil war broke out between the Frente de Libertação de Moçambique (FRELIMO) and the Resistência Nacional Moçambicana (RENAMO): since the guerrillas led to the division of the national territory into two large areas each controlled by the two warring forces, both agriculture, transport and energy production suffered very serious damage that made all the measures taken to develop in shape useless. the country’s economy is autonomous. Furthermore, the ideological positions of FRELIMO had introduced social and economic models inspired by Marxism-Leninism, with the collectivization of land, the elimination of the free market and the concentration of the agricultural population in community villages (aldeias comunais). As a consequence of these political choices, not accepted by the population, and due to long periods of drought (1976, 1982-83) and floods that completely destroyed the crops of a few years, both commercial and subsistence crops gradually went declining until the end of the 1980s.

Only with the end of the civil war (1992) and with the improvement of diplomatic relations with the South African Republic, and after the Marxist ideology was officially abandoned in August 1990 (in 1991 the official name of the state, People’s Republic of Mozambique, is been modified in the Republic of Mozambique) the economy has slowly begun to recover, also thanks to the more abundant aid that is now being sent by the European Community and the United States of America.

Commercial crops include cashew nut (northern coastal strip), cotton (Cabo Delgado, Niassa, Nampula, Zambézia), sugar cane (Sena river valley, area south of Beira, coast north of Maputo). The cultivation of tea has given good results in the hilly and mountainous areas towards the border with Malawi, while the coconut, for the production of copra, still gives good results in the large coastal plantations of the provinces of Zambézia and Nampula. The cultivation of sisalana agave is in decline. Among the subsistence crops corn, sesame, fruit, potatoes and rice prevail; farming is of limited importance because trypanosomiasis is present in two thirds of the country’s territory.

The exploitation of the forests has developed mainly around the Beira railway, while fishing has had a recent increase with the technical assistance of the Cubans. Mineral resources are not of great importance (coal mines in Moatize near Tete and natural gas fields near Inhambane) while hydroelectric power generation has undergone a strong increase with the completion of the Cabora Bassa plant and other smaller plants. The energy produced is largely destined for South Africa as the national industry is very little developed: it is concentrated around the capital Maputo (about 1,500,000 residents in the urban area), which is also the main port of the country and the second of Africa. Maputo, Beira and Quelimane are the outlets on the Indian Ocean of South Africa.