Haiti. The political crisis in Haiti, which seemed to be over with the election of Michel Martelly as president and the nomination of Garry Conille as Prime Minister in 2011, entered a new phase on February 25, when Conille resigned after only four months. A UN delegation visiting Haiti in February found that the country was still institutionally paralyzed, threatening the much-needed aid for reconstruction following the catastrophic earthquake in January 2010. Although the number of people still living in makeshift camps had fallen by two-thirds, year to half a million.

On June 19, amendments to the Constitution came into force, aimed at strengthening the democratic institutions. Among other things, a Supreme Justice Council with nine members will exercise oversight of the legal system and strengthen its independence. A constitutional court must also be created. In addition, all Haitians with dual citizenship were given the right to vote, which significantly increases voter turnout to include the 2-4 million Haitians who live abroad, and women are allocated to public office.

In early May, Congress approved Laurent Lamothe as new prime minister. One of his first actions was to stop a May 18 protest action by a thousand former soldiers, some with weapons, demanding the restoration of the 1995 abolished army. In both the capital Port-au-Prince and Cap-Haiti, riots with stone throwing and tear gas erupted, and about fifty people were arrested. However, President Martelly himself was no stranger to a re-establishment of the army, and above all Brazil, who led the UN force (MINUSTAH) which served as a replacement for it, declared itself ready to assist in the construction of a new army.

Towards the end of the year, President Martelly faced increasing political dissatisfaction. Price increases on basic foods led people to go into extensive protests in, among other things. Cap-Haiti in September, and protests quickly spread to other cities. However, a general strike that was announced until October 1 never ended. 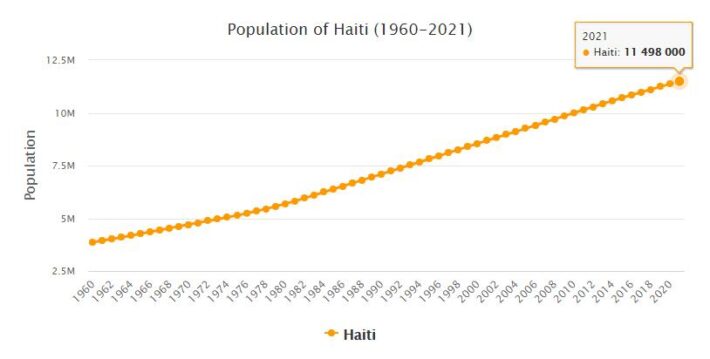 Between the censuses of 1971 and 1982 the population increased from 4,314,628 to 5,053,791 units, with an average annual increase of 1.6%; in the same interval the population of the capital, Portau-Prince, went from 306,053 to 449,831 residents in the city and from 493,932 to 763,188 residents in the entire agglomeration, with increases of 4.3% and 4.9% respectively. This reveals a strong influx of Haitians (especially women, who find employment in domestic jobs and light industries) in the only true urban center of the country: a country which, moreover, remains markedly rural, since at the date of the last census the population urban areas amounted to just 22% of the total and at the end of the 1980s it still did not reach 30%. After all, apart from the capital, the cities are centers of small demographic amplitude (Cap-Haïtien alone exceeds 50,000 residents), mainly administrative, with modest industrial functions. According to a 1990 estimate, the Haitian population would have reached 5,690,000 residents, with a density of 205 residents / km2.

The persistence of rural and archaic aspects also appears from the high number of agricultural workers, which still in 1990 amounted to 57% of the active population. Agriculture, which therefore remains the basis of the economy, has to deal with the serious problems of recurrent drought, erosion, damage caused by deforestation, land pulverization. The most common crops are those of banana (over 2,500,000 q of fruit in 1989), coffee, notable for export, fruit trees such as avocado and especially mango, of which Haiti is one of the main producers. The other traditional crops (sugar cane, citrus fruits, coconut, cocoa, cotton) are stationary, and in some cases in decline. The extraction of bauxite, which seemed very promising, it has been declining significantly, although the mineral still fuels exports. Manufacturing industries continue to be adversely affected by the lack of national capital and the country’s political instability in recent years.

The trade balance remains heavily passive. The United States is the main partner, especially as regards exports, of which they absorb more than 50%. Tourism has considerable possibilities (H. could profit from the tourist saturation of other Caribbean lands), but even in this case the political events have had an unfavorable influence, so that the number of visitors has remained almost stationary in recent years (133,000 in 1989-90).

In these conditions, it is not surprising that Haiti fully retains all its characteristics of a country in crisis, as evidenced by the consistent migratory flow, especially towards the neighboring Dominican Republic and the United States (significant contingents of refugees have contributed to its strengthening.), the very low – and decreasing – gross domestic product per capita (370 dollars in 1990), the marked dependence on international aid.