Swaziland. Democratic activists in January urged the Coca-Cola Company to withdraw its support for the authoritarian king Mswati’s regime. Some data claimed that Coca-Cola accounted for 40% of Swaziland’s state income.

Swaziland was in a difficult financial crisis, but the government refused to accept South Africa’s loan offer because it was conditional on demands for political and economic reform.

The crisis hit the health services hard. State hospitals ran the risk of ending braking medication against HIV. Swaziland has one of the worst HIV epidemics in the world. Of the 1.2 million residents, about 230,000 are infected with HIV.

When the budget was published, it turned out that the royal family and the military received increased funding, while major investments in the health and social sector failed. Over 60% of the people were estimated to live in poverty, while the king with his 13 wives was believed to have a wealth of over $ 100 million. In addition, during the year, the king received a private jet, according to himself by an anonymous sponsor, but according to the opposition paid with tax money.

The government planned a censorship law that would ban users of Twitter and Facebook from criticizing the king. Although Internet use is limited in Swaziland, Facebook and Twitter have been used to organize protests.

A protracted conflict between mobile operator MTN Swaziland and state-owned post and telecom company SPTC reached its peak in October with a constitutional crisis. MTN, which had its king and prime minister among its shareholders, had won a legal battle against SPTC for monopoly in part of the telecommunications market, and then the authorities closed SPTC’s service.

Parliament, which urged the government not to shut down the service, voted through a vote of no confidence. According to the constitution, the prime minister would resign after three days, otherwise the king must dismiss him. But both failed to vote. Demands for the government’s resignation grew, but after a couple of weeks Parliament completely reversed and resumed its confidence vote. Pressures from the king were considered to be behind.

In November, Ellinah Wamukoya was named Africa’s first female bishop in the Anglican Church. She was consecrated within the South African Church but she will serve in the Church of the Conservative Swaziland. 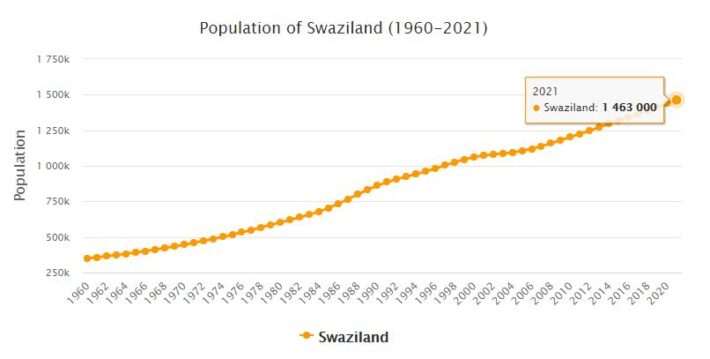 Internal state of southern Africa. The country (980,722 residents at the 1997 census), which has always had one of the highest growth coefficients on the continent, has seen a significant increase in mortality due to the very high rate of AIDS spread (38.8 %) (29.7 ‰ in 2006) and infant mortality (71.8 ‰), decrease life expectancy at birth and change the distribution of the population by age and sex. The major demographic and economic center is the administrative and judicial capital Mbabane (70,000 residents in 2003), while the legislative capital Lobamba has little importance.

The Swaziland is one of the poorest countries in the world, where two thirds of the population live on less than a dollar a day and the survival of about 200,000 people is entrusted to humanitarian aid. Also from the beginning of 21° sec. development indicators showed signs of weakness and the growth rate was lower than the albeit weak demographic increase. The economy remains not very diversified and most of the population is dedicated to subsistence agricultural crops and only that of sugar cane ensures export income, but is subject to climatic events, with a succession of periods of drought, and to the trend of international sugar prices. The industry is dominated by productions with low added value (transformation of agricultural and textile products), while the mining sector, despite the presence of non-negligible resources (asbestos, gold, tin, coal), contributed in 2004 only for 0, 6% to the formation of GDP. The country still depends heavily on the Republic of South Africa, from which it receives four-fifths of its imports and which absorbs three-quarters of its exports. The parity of the national currency, the lilangeni, with the South African rand penalizes the Swaziland which thus sees its margin of autonomy reduced in the context of a monetary policy.