El Salvador. In the March 11 congressional and municipal elections, the opposition right-wing party ARENA (Alianza Republicana Nacionalista) became the clear winner and the ruling left-wing party FMLN (Frente Farabundo Martí para la Liberación Nacional) clear loser. Although ARENA was once again the largest in Congress, the strength of the parties remained largely the same, and ARENA still lacked 10 seats to achieve its own majority. The wave champion party GANA (Gran Alianza por la Unidad Nacional), which both parties must court with to get parliamentary majority, therefore became the congressman’s big winner with eleven congressional seats.

However, the great loss for the FMLN did not occur in Congress but instead on the municipal level. ARENA retained the mayor post in the capital, San Salvador, the country’s second most important political office, through the re-election of Norman Quijano with 63% of the votes cast, against 32% for FMLN candidate Jorge Schafik Handal Vega. That makes Quijano a big favorite for the presidential post in the 2014 election. Although the FMLN won in 92 of the country’s 262 municipalities, it lost power to ARENA in several of the country’s most important cities. In total, ARENA controls over 52% of the country’s municipal residents as against 32% for the FMLN.

The notoriously high murder rate in El Salvador fell from 14 per day to 6 per day during the year, which, according to the government, was due to effective police fighting against organized crime and the gang (“maras”). However, media claimed that the declining figures were due to an internal ceasefire between the main gang Salvatrucha and Barrio 18.

In June, President Mauricio Funes presented a proposal to allow expatriate citizens to vote in elections in El Salvador. About 2 million Salvadorans reside abroad and their votes will be of major importance in the 2014 presidential election. 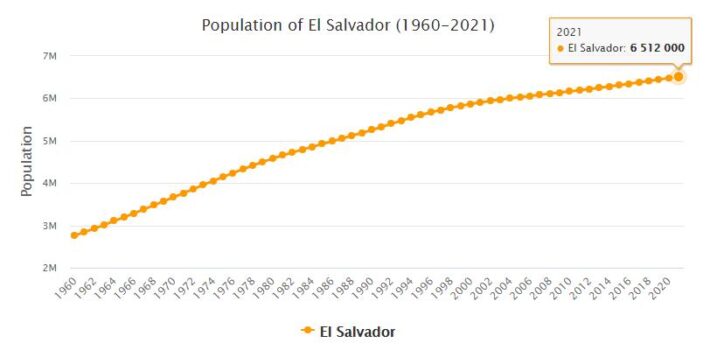 State of Isthmian Central America, located on the Pacific side. The country is overpopulated (at the last census, which dates back to 1992, the population exceeded 5.1 million residents) and the rate of demographic growth, although it has decreased, is still higher than the development of resources (in the period 1995- 2004 per capita GDP only increased by 0.7 % per year). This situation has led to a consistent outward migratory flow (the rate is estimated at around 3-4 ‰ per year), whose remittances are linked to the very survival of the country: annually their value is around 2.8 billion dollars, equal to about20 % of GDP, and makes it possible to compensate for the country’s structural trade deficit. In the United States, where there is a strong Latin American presence, the number of institutions that manage the transfer of funds to the various countries of origin of emigrants has increased, and at the same time the importance of the Salvadoran banking system that must manage has increased. those incoming. In the first five years of 21° sec. the economy of the United States appeared not very dynamic due above all to the rise in oil prices on international markets and the weakness of investments. Export-related development has been held back by high inflation and reduced competitiveness compared to other countries in the region, and only, as mentioned above, the growing importance of remittances from Salvadorans working abroad has mitigated the decline in income. traditional activities and the progressive pauperization of a large part of the population. The primary sector is increasingly in crisis also due to the upheavals caused by tropical cyclones, which periodically devastate the territory, and the earthquake that hit the country in 2001., so much so that the government has allocated aid to relaunch the cultivation of coffee and sugar cane, the main export crops for years. The situation of the industry is better, the most important sectors of which are that of agri-food, chemical and textile products. There is a substantial presence of the maquilas sector, which in 2004 is estimated to have represented over 50 % of total exports.

The economic and social problems for decades toiling on the country, ruled by the end of the civil war (1980-1992) from the far-right party Alianza Republicana Nacionalista (ARENA), they continued to remain on the threshold of 2000 substantially unresolved. Strong inequalities in income distribution, high unemployment rates and poor infrastructure investments persisted. All this contributed to keeping the situation of public order particularly serious, which recorded a strong growth in common crime, and in particular in the activity of the maras (youth gangs, active above all in urban areas).

Popular discontent with the government’s economic policy intensified in the early months of 2000 and conditioned the results of the legislative elections in March, in which, for the first time, the opposition party Frente Farabundo Martí para la Liberación Nacional (FMLN) managed to obtain the relative majority of seats (31 out of 84), overtaking the ARENA (29 seats). However, the reins of power remained in the hands of President F. Flores (elected as ARENA candidate in 1999), who was committed in 2001 to revive the country from the dramatic earthquake that had hit it (Jan-Feb). During 2002 agitations against the government’s economic policy resumed, in particular against cuts to public health. More and more distant from the expectations of the population, the ARENA suffered a further decline in the general elections of March 2003, in which it obtained 27 seats, against 31 of the FMLN. In an effort to regain consensus in the presidential elections of 2004, the government mitigated the liberal policy, adopted a series of populist measures (including the increase of pensions and reduction of electricity prices) and relaunched the fight against crime.

The executive’s propaganda paid off, and ARENA candidate EA Saca managed to beat FMLN’s SJ Handal in the first round. The new president made internal security, the fight against unemployment, the promotion of foreign investment and the reform of public services among his priorities. The tightening of repressive measures and the increased deployment of police forces on city streets led to an increase in arrests, but the failure to implement reforms aimed at eliminating the causes of social unrest did not decrease criminal violence. Meanwhile, internal conflicts led to the split of the FMLN and the formation (June 2005) of the Frente Democrático Revolucionario (FDR). This weakened the opposition and allowed the government to regain a majority in parliament. The political elections held in March 2006 in fact registered an affirmation of the ARENA, which obtained 34 seats against the 32 of the FMNL; the FDR, which appeared together with Cambio Democrático, obtained 2 seats. In foreign policy, new trade agreements were signed with the United States (March 2006) and the border disputes with Honduras resolved (April 2006).