Cameroon. In February, three women were tried for homosexuality. Sexual contact between people of the same sex is prohibited in Cameroon and can result in between six months and five years in prison. The women were identified by the one woman’s husband, who reportedly told her to have had sexual relations with the other two women. The trial was updated in March but had not resumed at the end of 2012.

In April, former Prime Minister Ephraim Inoni and former Interior Minister Marafa Hamidou Yaya were arrested. They were charged with embezzlement in connection with the purchase of a new aircraft for Cameroon’s president in the United States in 2004. The jet cost $ 31 million. Already during the premiere tour, the plane’s engine began to malfunction and the pilot was forced to land emergency. On board was then President Paul Biya with wife and children. Afterwards it emerged that the Cameroon delegation had bought an old but freshly painted plan.

Former Interior Minister Yaya had been seen as a possible successor to Biya but was dismissed in December 2011 when the jet deal was discovered.

In September 2012, Yaya was sentenced to 25 years in prison for his involvement in the jet plane business. Yaya denied the crime and said he would appeal the verdict, which he believed was political. Earlier, another former minister, a former US ambassador and the head of the now defunct national airline had been convicted of his involvement in the deal. The verdict against former Prime Minister Inoni was expected to come later.

In 2012, President Biya celebrated 30 years in power. He is thus one of the African leaders who has managed to stay in power for the longest time. Biya, who has ruled Cameroon since 1982, has said he wants to be remembered as the one who introduced democracy in the country. Admittedly – after threatening civil war – he agreed to introduce multi-party systems and hold the first multi-party in 1992, but Biya has been criticized for electoral fraud at all re-elections. In addition, since the constitution was amended in 2008, he can be re-elected as many times as possible and cannot be prosecuted even if he resigns. 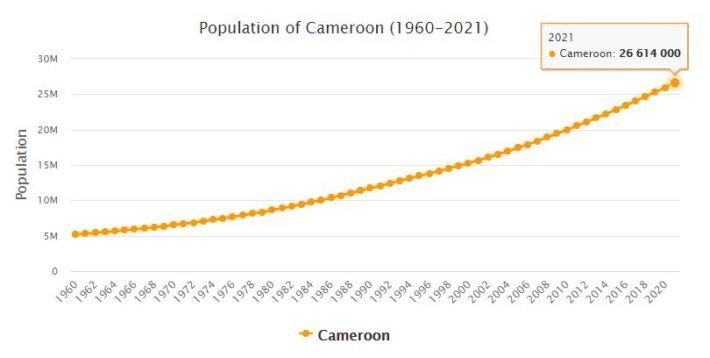 The per capita income is modest and socio-cultural indicators, such as the illiteracy rate, life expectancy at birth and infant mortality, attest to the persistence of a situation of marked backwardness. The pressure on resources is very high and poverty is still widespread. The birth rate, although it has contracted compared to past decades, is still above 40 ‰ and, since the death rate has also undergone a slight contraction, the average annual demographic increase has remained substantially unchanged.

The production of food crops generally manages to keep pace with population growth, even if it is exposed to the risk of recurrent droughts. Particularly striking is the increase in rice production, which has grown by 150. 000 q, annual average for the period 1975 – 80, at 550. 000 q in 1996, due to the tenaciously pursued policy to achieve food self-sufficiency. The internal deposits of bauxite, the reserves of which amount to 1100 millions of tons are not yet exploited, even if the recent construction of the Transcameroonian railway from Douala to Ngaoundéré has created the conditions for the enhancement of this resource; meanwhile, the Edéa aluminum electrolytic refining plant continues to be supplied with Guinean minerals.

In decline appears the production of oil (5 million tonnes in 1996), due to the poor consistency of the reserves, evaluated in 1993 in 54, 8 million tonnes. The recent discovery of a natural gas field on the continental shelf has given rise to feasibility studies for a gas liquefaction plant in Kribi, intended to meet the national demand for fuels. Kribi is also expected to lead a controversial pipeline under construction, 1050 km long, of which 880 kmin Cameroonian territory, which would have the function of ensuring an outlet to the sea for the oil extracted from the fields of Doba, in southern Chad. The primary processing industries (oilseed squeezing, cotton ginning, rubber and cocoa processing) and manufacturing (construction materials, mechanics, textiles and food) have seen a considerable increase in productivity following the disengagement of the state and a restructuring program which, after a severe economic crisis around the mid-1980s, has transferred most of the companies to the private sector.

The railway network (1104 km) is the backbone of the transport infrastructure system, which also makes use of 30,300 km of roads (1995), of which 4,300 km are asphalted. The port of Douala-Bonabéri absorbs 95 % of the merchant movement carried out by sea (4.2 million tons of goods loaded and unloaded in 1995). The repayment of the foreign debt, estimated at 9, 51 million dollars at the end of 1996, imposes an economic policy of austerity, agreed with the International Monetary Fund, which penalizes national companies, already hit by the drop in domestic demand.