Algeria. In the May 10 parliamentary elections, President Abdelaziz Bouteflika’s National Liberation Front (FLN) party was the largest with 17.3% of the vote. Together with the National Democratic Assembly (RND), it was possible to continue to govern, even though the moderate Islamist Social Movement for Peace (MSP), which has been a member of the government coalition since 2004 and which went to election as part of the Islamic Green Algerian Alliance (AAV), left the government with reference to the fact that the elections had not been democratic. A number of parties also boycotted the election because they considered it undemocratic, including the Berber-dominated Collection for Culture and Democracy (RCD). Bouteflika was criticized for increasing the number of seats in Parliament from 389 to 462, which mandated a large number of small parties and created a split opposition. Eight of the small parties elected to Parliament decided to boycott the work there and allied themselves with seven parties outside Parliament. An independent election commission ruled in June that the election had not been “credible or fair”, but that report was rejected by FLN and RND.

The government forces’ fight against the jihadists in al-Qaeda in the Islamic Maghreb (AQIM) continued. Several high-ranking leaders in the movement were killed during the year, as were a number of lower-ranking jihadists. Government soldiers and police also fell victim to the fighting. Several jihadists were also arrested and brought to trial for various terrorist offenses. Two of them were sentenced to death in March.

In April, a jihadist militia group in Mali kidnapped seven diplomats at the Algerian consulate in the city of Gao. They demanded that some jihadists be released from Algerian prison. When Algeria did not give in to the claim, jihadists killed one of the diplomats in September, according to their own records. The US exerted pressure on Algeria to play a more active role in the fight against jihadists in Mali (see also Mali).

Along with Tunis, Algeria became part of the Ottoman Empire in the 16th century. The brothers Arroudj and Kheireddine threw the Spaniards away from the coast and extended the dominion of the state over an extensive territory. The strength of the navy gave the country great respect, and its independence was confirmed through several treaties: with the Netherlands in 1663, France in 1670, England in 1681 and the United States in 1815.

Wheat production was gradually increased until it could be exported – for the first time since the Hilalian invasion (see Mauritania). However, wheat exports were also the direct cause of European intervention: In the late 18th century, the revolutionary government in France bought large quantities of wheat of Algeria, which, however, were never paid. Napoleon and the re-established monarchy withdrew the case until the King of Algiers in 1830 vigorously demanded the French consul for the payment of the debt. When he once again received apologies and explanations, he replied by overfusing the perplexed French official. The overfishing was costly: 36,000 soldiers landed in Algeria to “avenge the attack”. However, it was only a French pretext to realize the carefully planned plans for the establishment of a colony on the African north coast. But the resistance crushed the invasion attempt.

In 1840, 115,000 French soldiers invaded Algeria and thus started a new conquest war. Several failed rebel attempts were made against the French. In the southern part of the country, however, the nomad tribes maintained their almost complete independence and fought until the presence of the French in the 20th century. (See Western Sahara).

It was not until about 1870 that resistance in the northern part of the country was crushed. In 1873, the French initiated an expropriation program. to transfer French settlers. Already at the end of the century, there were ½ million French settlers in the country, and that figure had risen to 1 million by the end of World War II. These pieds-noirs (black-footed) Frenchmen seized the best lands in the country, and the whole economy was reorganized for the purpose. to serve the interests of the colonial power. The structures of the peasant community were shattered and the lives of the Algerians destroyed. The proletarianization of the peasants was accelerated at about the same time that production really started on the colonies. 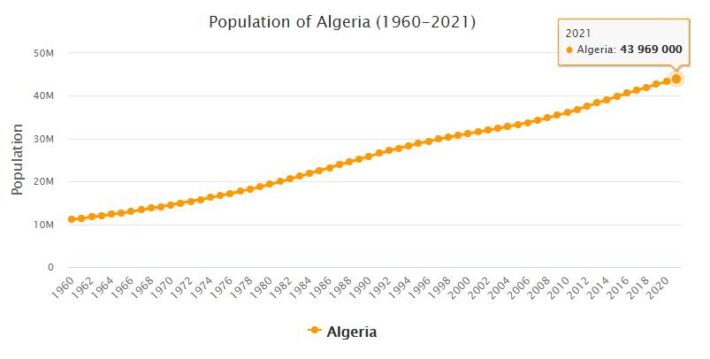